My first time with an e-bike Hotel Executive

My first time with an e-bike 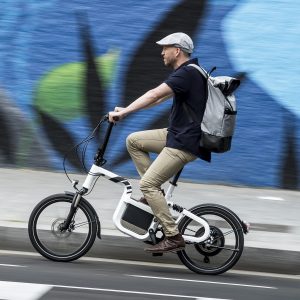 When I was a child, I learned to ride a bicycle, I couldn’t believe all the emotions that pedaling on two wheels could provide. That incredible feeling of freedom that not only allowed me to get to the sites faster, but much further than I had ever thought about, master the balance, learn what happens with the mass transfer according to the brake you press, tilt the body to close the path in a curve … And it is that my enjoyment in childhood would not have been the same without the bike.

But time passes, and one gets older and, your faithful companion, is forgotten in a corner of the garage. Your first job, your first car, your first home … Until suddenly, without looking for it, the bike finds me again. It was 1992 when the Mountain Bike boom took place in Spain. And I, like many, bought a beautiful bicycle to enjoy in the countryside both beautiful surroundings and the opportunity to recover a physical form that, like my first bike, seemed to stay after my childhood in that corner of the garage. The experience excited me again, but neither my physique nor my head were prepared for an effort that seemed titanic to me. As if it were, for me, climbing an 8,000, because I had no time to train and what I wanted was to go out to enjoy from the first minute.

Many years have passed again and, although my physical form I believe that it has not deteriorated to that extent, now with more than fifty years and more gray hair than brown hair, what I am clear is that it has not improved and, the efforts Without a doubt, they cost even more. Therefore, the first time I heard about bicycles with assisted pedaling or e-Bike, I didn’t rush. I thought it was a technology designed for me, but first I had to prove how they worked.

It was at the beginning of summer, when it was already hot but the air still cooled with movement. The first thing that caught my attention was its ease of use. With the same sensations that I remember from my childhood on a traditional bike but with a small effort. In addition, assistance can be regulated depending on whether you feel like doing more or less force when pedaling. You really know that the assistance is there, although you hardly perceive it by the naturalness of your intervention. You only feel that it is hardly difficult for you to pedal while you move at a speed at which in a little more than 100 meters you would be physically paraded if you did not have that assistance. And suddenly, on my way, a great slope appears. Already in the gesture of turning around I think … What if I try to raise it? And, no, I couldn’t believe it. As in plain, it climbed effortlessly, at a sustained speed and without losing speed throughout the slope. This was a new sensation for me. So nice that today my e-Bike waits for me every morning in the garage parked in front of a car that, surprisingly, is now my second means of transport. I no longer just move from one place to another. Now I enjoy fun walks to work or a meeting while deciding when I want to do some exercise. Thus, I have managed to recover a physical form that I thought I would not be able to enjoy again and, above all, without hardly realizing it. This time I am sure that my e-Bike will never end up in a forgotten corner of the garage.

My first time with an e-bike
Teilen mit:
Adressevia Nazareno Orlandi, 32, Siena, 53100, SienaGPS0,0Telefon0577331210E-Mailinfo@executivehotelsiena.comWebseitewww.executivehotelsiena.comTwitterhttps://twitter.com/executive_sienaFacebookhttps://www.facebook.com/executivesiena
Is it worth investing money to buy a telescopic seat post?
Is it worth buying a telescopic saddle holder for my mountain bike? What advantages does it offer? Is it a...
Mehr Info
Your holidays with an ebike
In the summer season is when we have more vacation days, more time to rest and, above all, much more...
Mehr Info
Riding an E-bike: what's the right position?
Although we do not usually pay enough attention, taking the right position when driving our e-Bike is essential to d...
Mehr Info
Will e-bikes one day replace traditional bikes?
A few years ago, seeing an electric motor bike on the street made us think of an isolated case of...
Mehr Info
At what maximum speed can I go with my e-Bike?
In an assisted pedaling e-Bike the electric motor helps pedaling, with a degree of assistance that can be adjusted t...
Mehr Info
E-Bike or electric scooter?
The acceleration of electric bikes (accompanied by pedaling force) is also greater, as is the maximum speed of movem...
Mehr Info
Which company offers the best bicycle insurance?
Which company offers the best bicycle insurance? When it comes to buying bicycle insurance, it is essential to kn...
Mehr Info
When should I change my bicycle?
In Italy, over one million new bicycles are sold each year. To this figure must be added those operating in...
Mehr Info
UCI cycling calendar 2019
Frome, Sagan, Thomas, Nino Schurter, Absalon ... The UCI is launching a new season and, once again, the focus will...
Mehr Info
Cycling reduces the risk of flu
That cycling is a source of health is something we already knew. Riding a bicycle regularly favors the circulatory s...
Mehr Info
Road disc brakes: advantages and drawbacks
Cycling is changing day after day. Every year, bicycle manufacturers dedicate millions of euros to developing techni...
Mehr Info
The best-selling second-hand bicycle models last year
In the second-hand market you can find bicycles of a very varied range. Mountain, road, cyclocross, with carbon fram...
Mehr Info
The best electric mountain bikes of 2019-2020
E-bikes are no longer conventional bicycles to which an electric motor has been added to make it easier to climb...
Mehr Info
Burnout syndrome
Cycling is one of the most difficult and demanding sports that exists. We know that our favorite sport requires comm...
Mehr Info
Be cyclists and parents
There is no doubt that cycling is a sport that engages us. There are other sports, like football or basketball,...
Mehr Info
10 curiosities you didn't know about the Bianchi bicycle brand
Bianchi is one of the most iconic bicycle brands in the history of cycling. Its characteristic blue color, the elega...
Mehr Info
Does having a beard slow us down on a bicycle?
Professional cyclists, and many fans, often depilate their legs. There are several reasons to do...
Mehr Info
Here is Chris Froome's training: 190 kilometers on mountain trails with a triathlon bike
Going to train in Colombia to prepare the season is common among the best cyclists in the international squad. Heigh...
Mehr Info