Here is Chris Froome’s training: 190 kilometers on mountain trails with a triathlon bike 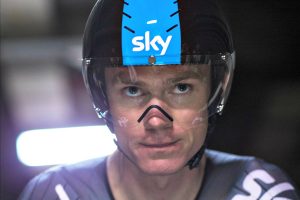 Going to train in Colombia to prepare the season is common among the best cyclists in the international squad. Height training helps boost and optimize oxygen consumption.

In fact, athletes who have been born and lived in areas above 1,500 meters of altitude usually have a higher hematocrit index than those who live and train at sea level.

The reason is that from that altitude the concentration of oxygen in the air begins to fall, being lower as we gain altitude. This context is known as hypoxia.

Training in hypoxic conditions for long periods forces the body to produce more red blood cells. In this way the athlete is accustomed to working in environments with low oxygen concentration, thus increasing their resistance. 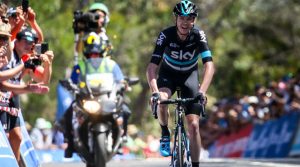 Hence, among the great cyclists, it is usual to carry out the preparation of the season in areas above 2,000 meters. Colombia, due to its mountainous terrain, is one of the destinations that meet these conditions.

Precisely in Colombia is Chris Froome. The Brit is training in the South American country to participate in the next edition of the Tour Colombia 2.1, a test  as preparation to face the next Tour de France.

Froome is publishing its trainings in the profile it has through the Strava social network. And some Colombian fans are taking advantage to record images of the intensity with which the Brit is doing his preparation in the heights. 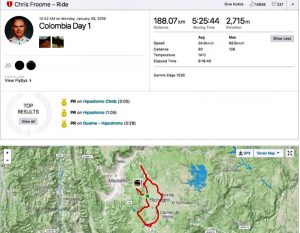 In one of his sessions, Chris Froome completed a route of 188 kilometers with 2,700 meters of positive height gain outside of Medellín in 5 hours and 25 minutes. At an average of 35 kilometers per hour!

The striking thing about this training is that the route included long stretches of gravel tracks and dirt roads and Froome made it on a Pinarello Bolide, an aero bicycle with time trial fittings.

Here is Chris Froome’s training: 190 kilometers on mountain trails with a triathlon bike
分享方式：:
GPS0,0电子邮件info@executivehotelsiena.com网站www.executivehotelsiena.comTwitterhttps://twitter.com/executive_sienaFacebookhttps://www.facebook.com/executivesiena
Is it worth investing money to buy a telescopic seat post?
Is it worth buying a telescopic saddle holder for my mountain bike? What advantages does it offer? Is it a...
更多信息
My first time with an e-bike
When I was a child, I learned to ride a bicycle, I couldn't believe all the emotions that pedaling on...
更多信息
Your holidays with an ebike
In the summer season is when we have more vacation days, more time to rest and, above all, much more...
更多信息
Riding an E-bike: what's the right position?
Although we do not usually pay enough attention, taking the right position when driving our e-Bike is essential to d...
更多信息
Will e-bikes one day replace traditional bikes?
A few years ago, seeing an electric motor bike on the street made us think of an isolated case of...
更多信息
At what maximum speed can I go with my e-Bike?
In an assisted pedaling e-Bike the electric motor helps pedaling, with a degree of assistance that can be adjusted t...
更多信息
E-Bike or electric scooter?
The acceleration of electric bikes (accompanied by pedaling force) is also greater, as is the maximum speed of movem...
更多信息
Bicycle insurances
Which company offers the best bicycle insurance? When it comes to buying bicycle insurance, it is essential to kn...
更多信息
When should I change my bicycle?
In Italy, over one million new bicycles are sold each year. To this figure must be added those operating in...
更多信息
UCI cycling calendar 2019
Frome, Sagan, Thomas, Nino Schurter, Absalon ... The UCI is launching a new season and, once again, the focus will...
更多信息
Cycling reduces the risk of flu
That cycling is a source of health is something we already knew. Riding a bicycle regularly favors the circulatory s...
更多信息
Road disc brakes: advantages and drawbacks
Cycling is changing day after day. Every year, bicycle manufacturers dedicate millions of euros to developing techni...
更多信息
The best-selling second-hand bicycle models last year
In the second-hand market you can find bicycles of a very varied range. Mountain, road, cyclocross, with carbon fram...
更多信息
The best electric mountain bikes of 2019-2020
E-bikes are no longer conventional bicycles to which an electric motor has been added to make it easier to climb...
更多信息
Burnout syndrome
Cycling is one of the most difficult and demanding sports that exists. We know that our favorite sport requires comm...
更多信息
Be cyclists and parents
There is no doubt that cycling is a sport that engages us. There are other sports, like football or basketball,...
更多信息
10 curiosities you didn't know about the Bianchi bicycle brand
Bianchi is one of the most iconic bicycle brands in the history of cycling. Its characteristic blue color, the elega...
更多信息
Does having a beard slow us down on a bicycle?
Professional cyclists, and many fans, often depilate their legs. There are several reasons to do...
更多信息